Let us introduce you to a very special company called Osler…

Established in Birmingham in 1807, Thomas Osler made small glass trinkets before undertaking an order for icicle drops which lead to the manufacture of chandeliers. Though Osler had to contend with high taxes and duties on such things like glass (due to the debt from the Napoleonic war) he persevered and later he handed the business over to his commercially minded son Abraham Follet Osler, who included his brother, Thomas Clarkson into the running of the business. Focusing on creating new designs Clarkson assisted in the expansion of the business and they opened a showroom in Oxford Street in 1845. Later on in the 19th century India became Osler’s largest market outside the UK due to its wealth and shipping links.

Osler continued it’s success when Egypt’s ruler for the tomb of Prophet Mahomet in Mecca ordered a large pair of candelabras. Displayed in the London showroom these extravagant pieces attracted the attention of Prince Albert. In 1851 Great Britain opened its doors to the world with a superb offering of “art in industry” a showcase of British manufacturing. Over just 5 months 6 million people visited The Great Exhibition in its purpose built glass building situated in Hyde Park. 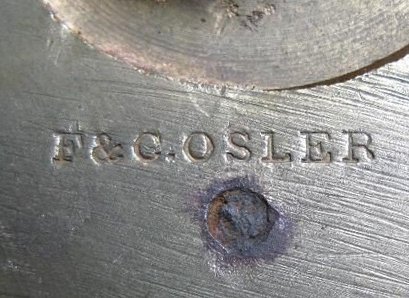 Osler provided a magnificent pure crystal fountain that occupied the entrance, the reflective qualities of the colourless cut glass proved perfectly suitable for large pieces such as the fountain, furniture and large lighting pieces. The fountain was admired by all, It was the most talked about item at the exhibition.

In 1876 Follett & Clarkson’s sons took over the business, moving with the times, they too created new designs which included the revolutionary invention of electricity! On 14th July 1906 when the children and grandchildren of Follett and Clarkson became the first directors they rebranded and the name F&C Osler was born. 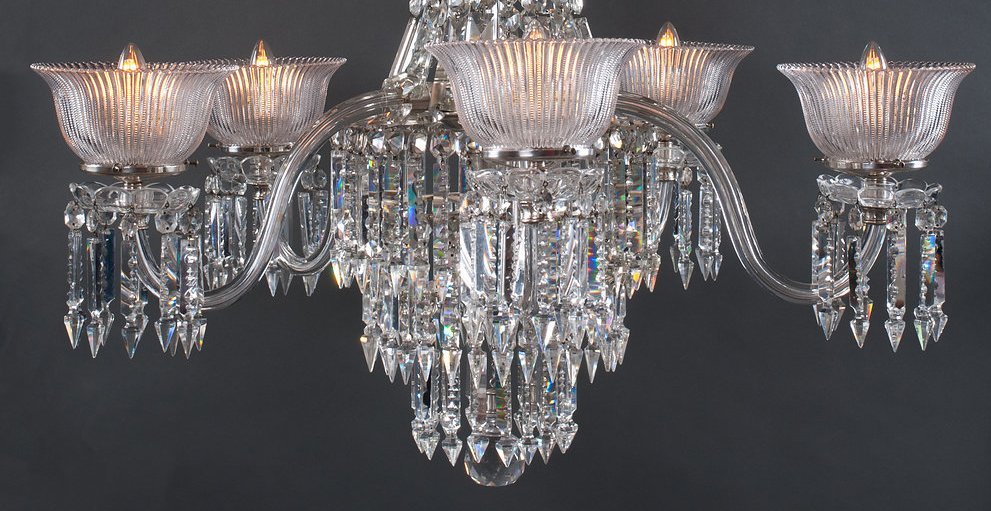 As we move on through the early 1900’s F&C Osler joined forces with Faraday and Son Ltd (1919) a company that specialised in metal period reproductions. Unfortunately incredibly tough times lay ahead; trade slowed overseas as a result of the Wall Street crash in 1929, in 1936 Crystal Palace burnt down along with the famous Osler fountain, and in 1941 during the 2nd world war the factory took a direct hit. Despite losing some machinery it was just 2 months before production was able to commence and 6 months before they were trading as normal.

After 158 years the company ceased trading. The company Wilkinson purchased remnants of the company and in 1985 they acquired Osler and Faraday lighting company. The name is now registered to ensure that the legacy of Osler and Faraday’s work continues at the high standard it was recognised for.

You may ask why we have chosen to talk about F&C Osler?

When Simon and Karen took over from the original Fritz Fryer over a decade ago, Simon developed a fondness, well actually an obsession, for Osler lighting. He was immediately drawn to the preciseness of the engineering, every piece designed to fit perfectly into a well thought out design, with numbered metalwork and well made components. He loved the beauty and purity of the crystal and the brilliance of the cut and molded glass. The Osler light - in whatever form is a coherent, intelligently designed piece to be admired and to be collected.

Our large collection of F&C Osler and Faraday & Son Chandeliers have been restored by our team of experts, their job is made much easier due to the exceptional quality components. The crystal is then cleaned and hand pinned by Margaret  - every piece of crystal appreciated as she re dresses the chandelier. View our current collection of Osler Antique lighting here.

The Osler story has all the attributes of a company that deserved to stand the test of time. This was a business built on ingenuity and resilience. Despite economic setbacks, war and cheaper commercial competitors it continued to trade. It diversified, collaborated and worked to its strengths by involving commercially minded and creative family members. This family run business didn’t forget its roots and never compromised with quality. Similar things could be said about Fritz Fryer. 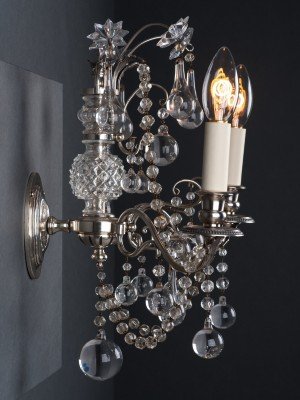