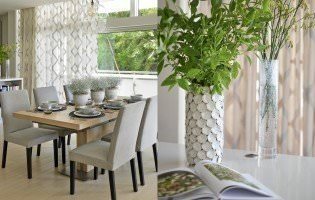 Room of the Week: Classic Meets Contemporary in this Open Living Space

This Surrey home is part of a development of new houses that feature Scandi touches (think cedar-clad exteriors) and lots of glass. Its generous, open-plan living area has a 3m-high ceiling and windows on three sides, and it’s positioned on the first floor to make the most of the sloping site’s lovely views. For its owners, a retired couple, it represents an exciting change. ‘Their previous place was a country farmhouse full of Queen Anne antiques and dark wood,’ says Susan Venn, who designed the interior.

‘The owners wanted a change, but didn’t know how to go about it,’ says Susan Venn of the initial brief for the project. So she devised a palette of gentle, muted tones and commissioned much of the furniture to give the space a feel of laid-back luxury. ‘The owners were initially drawn to a more countrified look, which would not have suited this contemporary space quite so well,’ Venn says. ‘In the end, we settled on something a little more classic.’

Venn began working on the home’s open-plan living space and kitchen before the development was finished, which gave her the freedom to make tweaks and changes to the developer’s designs. ‘The kitchen was included as part of the development spec,’ explains Venn, ‘but we changed elements of it, such as the worktop, and redesigned some of the units.’

A hand-blown glass pendant hangs over the dining table. ‘Rather than make the pendant a big feature, we had that big glass globe made, so you can still see through to the kitchen or the living room.’
SHARE

The evolution of the humble Coolie shade

A modern twist on a classic Georgian hall lantern

How To: Add a Personal Touch to Your Kitchen Design

A LIGHT FIT FOR THE AWARD WINNING RESTAURANT THE BOOKSHOP

The Ashes and The Pixley - Small but Mighty!